Koreans love English words. They use them everywhere – not always correctly of course – but with delight and enthusiasm. I love it – but it does throw one off occasionally (ok – often actually).

Example 1: English on a brochure cover means nothing! – Here in Kim’s Guest House there is one labeled ‘Spring Tourist Guide’ on the outside – without a word in English on the inside! It’s completely in Korean. So why put English on the cover? Your guess is as good as mine.

Example 2: The signs – There is so much English on signs here in Korea – I sometimes forget that people may not actually speak the language. It’s quite a funny feeling. You pass a store – the slogan is in English – like Paris Baguette with its ‘Fresh and Ready’ – and no one inside speaks English at all! It happens a lot – and it is always a bit of a shock. Street signs are often translated, stores advertise ‘Sale’, you see ‘Bank’, ‘Steak and Pasta’, and ‘Korean traditional Restaurant’. But while it makes it clear what service they are offering, don’t expect more than a ‘hello’ in English – you might be pleasantly surprised – and then again – you might be reverting to sign language pretty quickly!

Check out this picture – it’s advertising a water park – English on the sign includes ‘California Water Park’ and ‘Open’ – but I’m willing to bet that no one who works there speaks English – why should they? Clearly this is for Koreans to enjoy – despite the clearly California look of the bathing beauties. 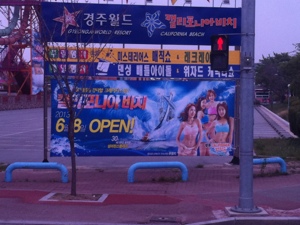 Example 3: Marketing Slogans – or What exactly did you mean by that? Consider this one for the city of Gyenogju – “Meeting place – The Scent of Culture – Time to Surpass”. What do you think they were trying to say? I get meeting place – but Scent of Culture? What ever does that mean? Do you think they were hinting that the place smelled? Can’t be, right?

Or here’s another one that amuses me – In Gyenogju, they make a special Barley cake (they sometimes refer to it as ‘bread’, but it is really 2 pancakes with red bean paste spread to hold the pancakes together). What is remarkable about it in my opinion is not the cake (it’s pretty bland) – it’s the number of ‘bakeries’ – often 2 or 3 on the same block. They all have the special ovens, and use the special boxes to make these cakes. How can there possibly be enough sales to keep them all in business? We got to try (for free) cakes from 2 different bakeries – and I must admit they tasted different. Can’t say I cared for either – but they definitely didn’t taste the same. But its the marketing in English that cracks me up. On one store – the Sign cheerfully proclaimed “The Barley Way to Health”, on another it announced that here you’d find the “Rich Chewy Texture of Sticky Barley”. Yummy sounding, eh? On a third I saw “100% domestic glutinous barley” – well, that’s definitely reassuring. Do some people import the Barley? Or perhaps not all Barley is Glutinous.

But my favorite language mis-adventure happened yesterday in the Gyenogju National Museum. This is a wonderful museum that attempts to explain – in a variety of languages, just a bit of the very complex history of this remarkable city. The artifacts on display are well presented – and the audio tour quite complete, if a bit robotic sounding. But it was the free English tour in one section that was over the top. There was an older gentleman responsible for giving the tour – and he proudly explained that he was a retired English teacher. Problem? His English was literally incomprehensible. At one point we thought he was talking about growing rice, and he really meant that they had a lice problem in 800 AD – which he explained by scratching himself.

But I really shouldn’t complain. The ability of Koreans to at least attempt to communicate in ‘my’ language puts us in North America to shame. We ran into trouble at the Metro – and despite our lack of Korean – and our helper’s lack of English – we muddled through. He didn’t give up – even when it was clear that we couldn’t communicate at all. Even if it meant carrying our bags up a staircase – forcing us to sit and wait while he got help – throwing in the towel just wasn’t option – Thank goodness.

And this willingness is official – Museums here have signs in 4 languages – and not just the name of the object – the entire description is translated. Even the subway maps and signs on the metro cars use both Korean and English names. I’ve been on Metros and Buses that announced the next station in Korean and English, can’t be to help the locals. I’ve even heard cross-walk signs speak English. Bank machines and Metro card vending machines always offer an ‘English’ language button, and Audio tours in even more languages are the norm – and not just in Seoul. It’s all pretty impressive – and very tourist friendly.

So as a prospective tourist to this intriguing country – you can rest easy. You might not quite understand everything – but I can guarantee you that the Koreans will make sure you have a wonderful time. It just comes naturally to them. What a country!

4 thoughts on “English in Korea – It happens!”