Jungang market is described on the map as a ‘fairly famous conventional market’, but to my mind – it was the quintessential market of Korea. Just large enough to qualify as a market, but small enough to remember which stalls were where! I loved it. 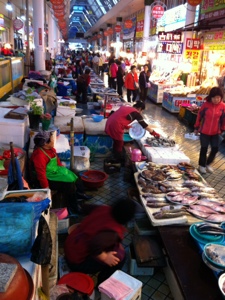 The market covers an area of roughly 4 city blocks – but it’s on 3 floors – we pretty much stuck to the main floor – which had at least one, and often 4 or more – examples of everything. For instance – there’s an awesomely delicious typical chicken dish here in Sokcho – Dak-gangleon – or deep-fried spicy chicken with a sweet sauce. It is finger-lick’n good. I’m no fan of KFC – but this stuff was amazing. The contrast between spicy and sweet was so good, I keep wondering how I can bring a box home to Montreal. There have to be at least two dozen stalls selling this stuff – each stall has it’s signature box, its deep fryers, its special sauce. But it doesn’t take a lot of mental effort to realize that the stall with the continuous lines is the one you want to buy from! We couldn’t figure out how the other guys stay in business, this one stall claimed so much of the ‘chicken’ shopping crowd!

But the Jungang Market isn’t just about chicken – it’s about fish and huge fruit and lots of other goodies!

That’s a Giant Pacific Octopus – we saw live ones in the aquariums and in the fish tanks, and boxed ones like this one ready to be taken home for dinner. I can not even begin to imagine how they are caught – but they sure were huge!

Speak of huge – look at the size of the apples (or is it a pear?). According to the son of the Intrepid Traveler, these fruits taste more like a pear than an apple – but regardless of taste – that’s a huge piece of fruit! 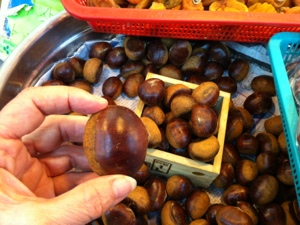 That’s a chestnut – and yes – it’s the size of my fist. I tried some roasted from a vendor just inside the market gates – and they were some of the best I’ve ever tasted. Fresh, no bad spots, super sweet. The son of the Intrepid Traveler admitted that they were so good – he might even revise his opinion of chestnuts. 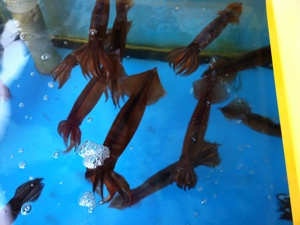 So – if you keep the fish alive and in a tank – if they don’t get sold – you can toss in fish food – and sell them tomorrow. We saw Squid (above), flat fish we think were in the flounder family (below), and two of the huge fish with giant mouths – your guess is as good as mine on what kind of fish that is. I really wonder who will be brave enough to buy him – or his brother in the same tank… 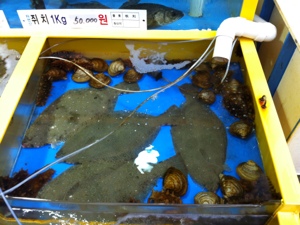 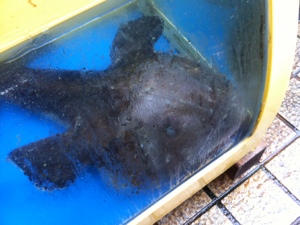 There were also giant red snow crabs (I snapped a picture of one trying to make a get-away – going from the fire into the frypan I think!).

I’ve yet to taste one – even though the lower part of the market features stalls with grills – and apparently they will cook up your fancy up for you – no charge! 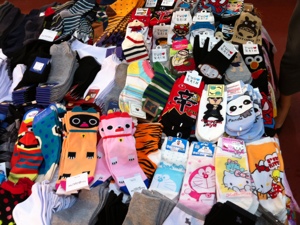 The hit of the market was clearly young Sophie – at 3 months old she looks a lot like a tiny Buddha – and we never passed a grannie that didn’t come over to pinch her cheeks. They would even take her away from Chris to get an extra cuddle.

I think Sophie showed great style and grace here – never fussing, never complaining – just taking in the oohs and ahs like it was her due!

The delicious food options were virtually unlimited – there were fried veggies and fish – including shrimp that were battered and deep-fried with not only their shells on – but their heads! So definitely munch carefully. 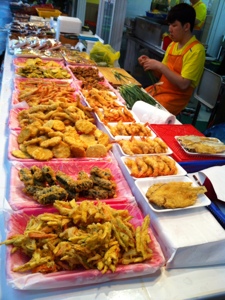 And for those of you wondering if their were veggie options – of course there were! Here’s what we think might have been cucumbers – or maybe they are squashes?

We tended to stick to tomatoes and bean sprouts – at least we know what those were! And for just $1 = you got enough for at least 2 meals. Such a deal.

Just outside the market – marking the entrance are two bronze statues. I did not care for the one of the bull – but the one with the fish really spoke to me of Sokcho, Fishing, and the hard life people in the area have had.

Its only in recent years that this area has economically taken off – and Korea is putting in big money in infrastructure here, from sidewalks to proper highways. So if you are coming – come soon – or even the Jungang Market will be changed beyond recognition.

Signing off – The Intrepid Traveler and the Soup Lady