I’ve discovered that I love Korean BBQ – in all it’s many flavors and tons of variety. And here in Korea – they really do it right. So far we’ve enjoyed 3 completely different versions of Korean BBQ – each more enjoyable – and I might say delicious – than the last.

Our first Korean BBQ was perhaps the most traditional – we ordered Beef Ribs and Pork Ribs – and while the baby-sitting by the host felt a bit like being in kindergarten and having our food cut up for us – it was fun. They brought out a selection of different side dishes – which we now know to be traditional, and two plates of chopped up small portions of meat for us to cook. Yum. 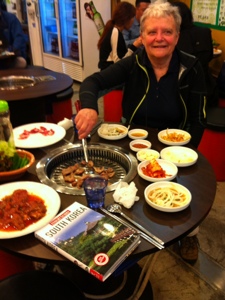 Our second Korean BBQ experience – last night actually – was very different. We ended up getting (not sure what we ordered, actually) – Bulgogi. Thin slices of marinated beef – and instead of grilling the meat, a ‘sauce’ was poured into a shaped pan. The center of the pan was used to ‘cook’ the meat – then the meat and lemon grass was slid off the ‘roasting’ section into the soup to finish cooking. Oh, it was good. And the kimchi was my favorite so far – not as spice as some versions, and very easy to eat. Yum. 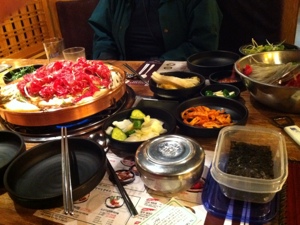 Tonight – we enjoyed our third BBQ – and it was different again. The traditional assortment of sides was presented – the kimchi was good – better than the first version, not as totally yummy as the 2nd, and there were pickles. The meat this time was pork ribs and what can only be called bacon. The slices were very thick, and once cooked had to be cut with scissors to a size suitable for picking up with chopsticks.

And in this restaurant – the grill consisted of a bowl filled with hot charcoal, and the stack you see above the meat is connected to a vent that was below the low table, pulling the smoke downward. And in this restaurant, unlike the first two – the traditional floor seating was provided. (We think that about 1/3 of restaurants use floor seating, and another 1/4 offer both types. Interesting – the prices tend to be lower in the traditional seating types)

In the first restaurant – a smaller, more casual and ‘worker’ oriented place – as far as I could tell the venting was done by leaving the front door open. In the 2nd – Bulgogi – version, no venting was provided – I’m not at all sure why it wasn’t required, but the restaurant wasn’t smoky at all.

Bottom line – all 3 versions were yummy – and I’d go back if there weren’t so many other places to try here in Seoul. And Lex, our host here at the Agit, just showed us pictures of street food that we must try!

Just not completely sure I want to try the raw shell-fish restaurant he suggested – maybe a tad more experimental than I’m really to be right now.

Signing off – the Intrepid traveler and the Soup Lady.