That’s a lot of history to explore in just one day – but in Berlin, it’s not that hard to quickly cover at least most of the major sites for history that I for one clearly remember.

I was born in 1948 – three years after the allies split up Berlin, and just one year after the “Cold War” started. So I was always aware that there were 2 Berlins – an East and a West. I was too young to remember the Berlin Airlift of course – but I was traveling in this part of Europe in 1969 – and the ‘Iron Curtain’ was of course very real to me. I crossed over in Czechoslovakia, had to exchange a specific amount of money at the ‘legal’ rate for every day I would be behind the curtain, and experienced for myself the very real, very popular, black market in currency. In those days $1 US would buy you enough money to live very nicely for a day.

So a huge reason for me to even be in Berlin was the opportunity to see for myself places I’d only read about.

We started the day by walking to the Brandenburg Gate. For my husband, the fact that Napoleon entered Berlin through this gate was of prime importance. For me it was the memory of Ronald Regan challenging Gorbachev to open this gate that made my seeing the gate so impressive.

After the gate – which is, in the end, only a gate – we walked the Holocaust Memorial. The 2711 concrete blocks evoke a feeling of both mystery and intense sadness. You can walk the maze considering the fate of so many people killed in the name of baseless hatred – or you can do what so many young people were doing – using the blocks to play hide and seek. 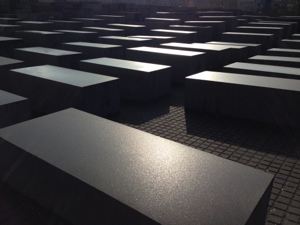 We skipped the information center – we have our own personal history to remember.

From the memorial – we walked to Checkpoint Charlie. For me – this was another must see site.

The free outdoor exhibit was both informative and interesting. I do not remember how large that Checkpoint had become before the Berlin Wall came crashing down in 1989. At the peak – it was at least 10 lanes wide. It was particularly chilling to read the accounts of each of the known successful – and un-successful attempts to get over the wall – the last one of which happened just 2 months before the wall fell.

At Checkpoint Charlie – they direct you 500 meters North to the last remaining section of the wall still standing – kept in respect at the “Topographie des Terrors” – an absolutely must see and read and remember account of what happened in Germany from 1933 (the year Hitler became Chancellor) to 1945 (the end of the war).

Using photographs taken by members of the Gestapo and multitudes of original documents, including most chillingly – instructions from Berlin to Cologne on how to behaving during ‘Crystal Night’. The increasingly rapid decent from reasonable to rabid is traced in detail in both German and English. A must see display.

A chilling way to spend most of a day – but well worth it.

After a late lunch, we opted to spend the rest of the day doing something a little more upbeat – so we walked to the Gemaldegalerie. This is Berlin’s Grand Survey of Old Masters – and it is awesome. We only managed to hit the highlights – but what highlights they were!

Caravaggio’s Amor Victorius, Pieter Bruegel the Elder’s Dutch Proverbs, a room full of Rembrandt’s – including the famous helmeted man – a painting no longer attributed to the master. All perfectly displayed, and excellent described in the audio guide.

But my top favorites were the Botticelli’s – interestingly enough NOT described in the Lonely Planet guide we’ve been using – but of course described in loving detail in the free with admission Audio Guide. 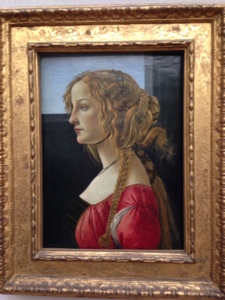 Speaking of Admission – we invested in the Museum Pass – which listed this museum as ‘included’. And the permanent exhibition was included. Unfortunately – the special exhibit on Picasso was not included, so we opted to save money and energy – and not go. But it is annoying to have a pass that covers some but not all. Oh well – I guess museums must make money somehow.

We ended the day by trying to see Neue Nationalgalarie – modern art housed in a building designed by Miles van de Robe. Unfortunately – that’s all we go to see – the building. The permanent collection is undergoing refurbishment, and the Museum Pass doesn’t cover the Special Exhibit. Neat building though.

Bottom line – a very interesting, albeit long, day in Berlin.