You never know what you’ll see just wandering around a city like Seoul, and I guess seeing the Korean version of Glee is a perfect example of what makes Seoul such an outstanding place to visit!

We were just walking into the King Sejong and Admiral Yi Sunshin Exhibits when I spotted a sign on a stage saying – I’m guessing actually – tonight 6:30 – 7:20. I didn’t know exactly what they’d be doing – but hey – it was a nice night – we were going to be there at the right time – why not.

So when we finished seeing the outstanding exhibit on Admiral Yi Sunshin, we walked out into the setting sun and seated ourselves on the stone benches to wait for the ‘event’ to start. Almost as soon as we’d sat down, a young man runs up to us with seat cushions – oops – missed those when we walked in!

The crowd was decidedly young – I’m talking from 15 to maybe 30 – so to say we stood out would be too obvious. But hey – not the first time I’ve stood out in the last few weeks. No problems.

A few minutes later – the show begins! On stage are 2 electric pianos, a guitar, and a drum set – and the performers are from the Seoul Arts College. I’m guessing this is an end of the year production showcasing their accomplishments – from dancing (hip-hop or grunge or traditional) to singing. From the all Korean brochure they handed out – I’m guessing at least 2 have been featured on TV shows, and they sure all looked adorable.

The instruments were on stage for 3 numbers, then they were removed to allow more space for dancing. Sometimes the teams rushed on stage from the sides, but at one point the kids, who had been sitting as members of the audience – jumped up and run onto the stage right past us. At another point – a lovely group of young ladies in traditional clothes glided onto the stage and performed a very beautiful fan dance. 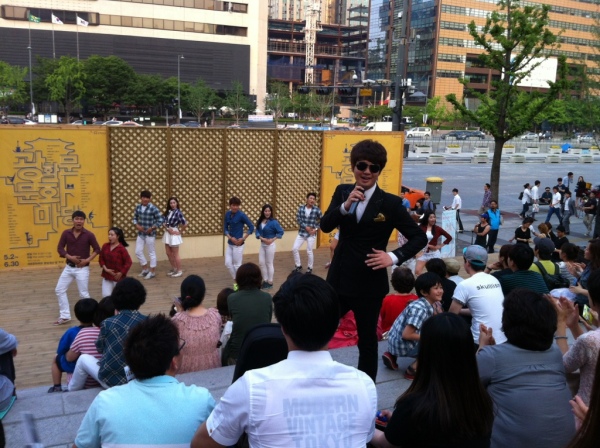 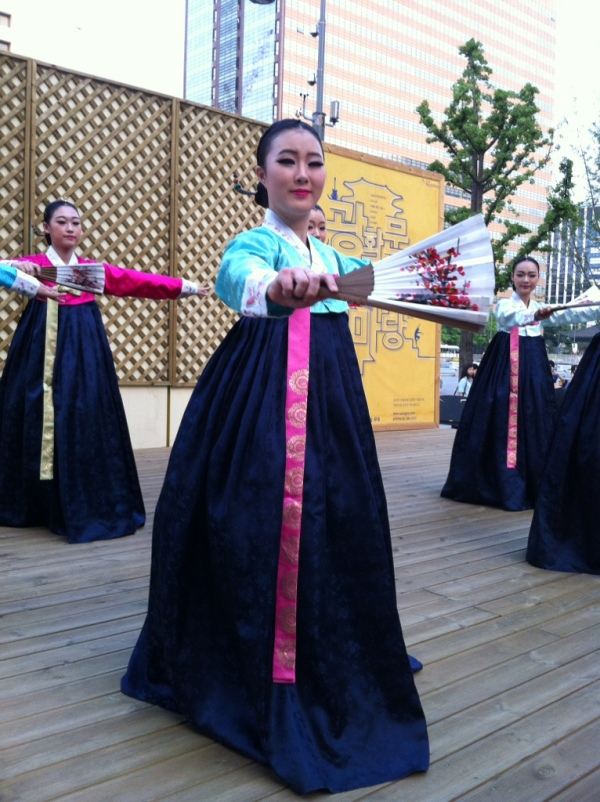 As the show ended, two young ladies (22 years old it turns out) approached us to ask if they could interview us for their class. They are studying English translation at a nearby college, and had been asked to practice their interviewing skills. Both of us agreed of course – and gladly answered their questions – yes we enjoyed the show, yes we liked traveling around Korea, yes we’re from Canada, yes Korea is a great place. My interviewer was Lee Woo-I – and she gladly posed for a picture. 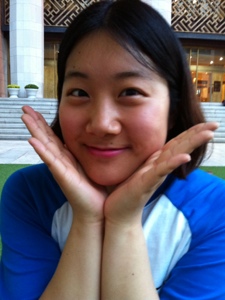 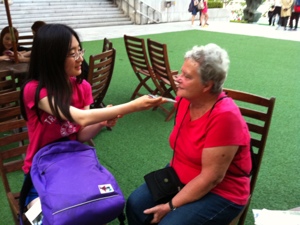 We were just finishing up when the flash mob happened – it was on the square directly in front of us – and featured about 200 young people – who gathered – did a line dance (everyone does the same steps – in unison) to music from a speaker system – and then just as quickly disappeared.

Signing off – the Soup Lady and the Intrepid Traveler.