Today we are determined to be smarter campers. We will pre-plan our lunch meal at the Hermitage to avoid that horrid excuse for food that the Hermitage cafe has to offer. How do we do this? We visit our favorite pastry shop on Nevsky Prospect – the Stolle. They sell meat pies that remind me of our tortiere – and they are perfect portable food.

So we bulk up on Pies, load up a paper bag (backpacks are not allowed in the Hermitage – but paper bags are definitely ok) and go thru the mandatory 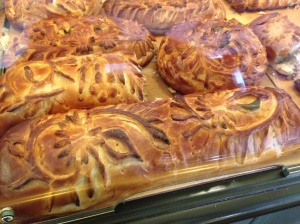 Oh are these the best Pies – and decorated so neatly. And yes – those are the ones they sell. We had lemon tonight for dinner – Yummy like no tomorrow.

Having learned our lesson about avoiding the crowds – and carefully picking our Hermitage day to be on a day when the museum stays open later at night – we figure we’ll have fewer mob scenes to deal with.

Well – sometimes the magic works – and sometimes you just run….

There are two additional tours on offer – the Gold room and the Diamond room. The English versions are carefully planned so that you can’t do both in one day – so we opt for the Gold Room. IT and I are coming back next week – we’ll do the Diamond room then.

But having a scheduled tour means having a deadline. You must be at this location at this time. Good luck working the rest of your visit around that!

We try hard to see sections we missed yesterday – the Imperial Apartments of Nicolas II and his wife – the last Tsar of Russia – the silver room with it’s wonderful special exhibition on vases for holding crosages during a dance – and most importantly to MP – the Loggia of Raphael. This runs along the entire Eastern wall of the ‘New’ Hermitage building – and we make our way there carefully – twisting and turning thru rooms to avoid the heavily trafficed areas with their fear inspiring mob scenes.

At the entrance to the Loggia is one of those tour group face-offs we’ve been avoiding. We watch in stunned amazement as an Italian Group and a Chinese Group battle it out for picture taking supremecy. An Italian Lady elbows a Chinese guest out of her way, and the Chinese lady retaliates with a drop kick number on her Italian foe – leaping boldly in front of her to kneel dramatically to get her shot.

For a moment – the air is filled with tension as the two groups prepare to defend their members – fortunately the Chinese tour group operator – who has probably seen this numerous times – heads off the encounter (which seriously looks to turn ugly) by announcing to his group that they are to head to the right to see an original Raphael. They ceed the ground – and move on.

IT, MP and I walk to the far end of the Loggia, where no tour groups go – and the atmosphere is quiet, relaxed, and calm. We stay there until both groups have left the next room – we are under no pressure to get that perfect shot – we leave the fighting to the clearly experienced!

We wander thru the Knight’s Hall with it’s collection of armour (not my favorite) – ending up in the Flemish Collection – Dozens of paintings by Rubens, Van Dyck and Snyder are displayed, each with a detailed entry in the audio guide. Color us happy.

The Gold Room tour is rather interesting – I’m not much a fan of jewelery that isn’t Regency period – or highly modern – if the stuff is more than 1000 years old, it needs to be pretty special to get me excited. There were a few pieces I thought worth admiring in the collection, including a nice ruby and emerald covered keepsake box. But generally if you’ve seen one gold leaf crown – you’ve seen them all.

We end the day in the Great Church that is inside the Hermitage (as Tsar – you wouldn’t want to leave home to worship – and why should you?). Truthfully – this was probably the highlight of the visit (well – aside from the fight..).

It’s not of course the church itself that is interesting – it’s the guide we bumped into that made our day.

We were trying to decide what was inside a glassed in room inside the church (turns out it was how Catherine would enter the church – no having to handle the crowds I guess), and she offered to explain. Her English was perfect – and we took this opportunity to try to get a better idea about what we’d seen when we’d attended Services on Saturday night.

We’d noticed that people would bend down to the icons – touch them with their foreheads, then kiss them. She explained that they touch foreheads to the icons to allow the knowledge of G-d into their brains. And they kiss the icons to show love.

It’s well past 7:00 when we exit the Hermitage – knowing full well that we’ve yet to even enter the Staff building with it’s extensive collection of Impressionist art – but we’re done. We need to get organized for dinner – meat pies only take you so far.

Tonight we’re going to eat in – and we stop at the Grocery store to pick up vitials. There I find a Pinot Noir from Moldova, and wonders of wonders – freshly roasted Chicken. A cucumber for veggies – and a selection of Russian cookies for dessert and we’re all set.

Diner at the Suricata is yummy – and very interesting. We ask one of our administrators – a Russian term for a person who is doing everything that is necessary to the well running of an establishment – to join us for a bit of conversation. One of the reasons we like to stay in Hostels is the opportunity we get to learn a bit more about the country. The conversation covers his life story – where he was born, how he came to St. Petersburg, what jobs he’s held while here.

People are – at the end of the day – just people.

Bedtime comes too soon – but off we must go.

2 thoughts on “Is there no End to the Hermitage?”