There’s a 2 Michelin Star Restaurant in Munich – the Dallmayr. It’s extremely small – extremely famous – and naturally – it’s very hard to get reservations. For some reason we’d thought we could sneak in at the last minute. Nope. But the very sweet Matre d’ asked if he could find another option for us – and suggested the Atelier. He even called and got us reservations.

So that’s how we ended up there – personal reference!

You’d never find it on Tripadvisor – 2 year ago someone reviewed it – in German, and gave it a 98 out of 100 – but blew it on the overall rating. Instead of a 5 – he gave it 2 – thinking Michelin stars. So the restaurant is ranked about 50th in Munich – instead of the first or second place it deserves. How do I know – after I ate there I emailed him to ask why the 2 stars!

Anyway – The restaurant is located in a tiny space (10 tables max – although all were large – at least double sized normal tables, with generous aisles and plenty of room for the serving staff). The tiny space is located in one of Munich’s don’t ask the price – you can’t afford it – upscale hotels. There were 2 other restaurants (at least) in the same hotel – the Garden which shared chefs and maitre d’ with the Atelier, although not the menu or wait staff, and rather surprisingly – a Trader Vic’s on a lower level. I haven’t seen a Trader Vic’s in at least 30 years. I didn’t get to see inside this one either!

But the layout was such that once in the Atelier – you didn’t hear or see or know anything about the other restaurants – it was a private space, set up to impress, comfort, and clearly feed you.

Huge round stone platters marked each place, and the salt and butter service was pink sea salt, unsalted local butter, and a house made spread.

I felt very under-dressed in my blue jeans and bright blue ski sweater, but the extremely well-trained staff didn’t bat an eyelid. If I came recommended by the maitre d’ at Dallmayr – I was ok!

There are only 2 main options – a tasting menu of 5 courses, or a tasting menu of 7 courses. But our talented, knowledgeable, and very pretty head waitress assured us that the kitchen was extremely flexible – we could pick and choose as we wished.

So my husband ordered the 7 course menu with wine pairings, I opted for the 5 course meal. In my opinion – I was the clear winner on this deal. My menu included unlimited selections from the cheese cart featuring raw milk cheeses from Maitre Affineur Waltmann.

Restaurants of this caliber offer additional surprise courses – delivered to the table and described as ‘gifts’ from the kitchen. At the Atelier – there were at least 4 or 5 such gifts – and the first one had 2 separate bites – both served on the same plate, I loved the mixture of crunch and soft in both the fish puree and mini ravioli. That distinctive combination of soft and crunch was a theme that niftily was repeated in most of the other offerings.

My 5 courses went from a lovely Duck breast dish with a side dim-sum of duck confit to a delightful fish slice delicately placed in a chinese lettuce and false flax oil puree. (Don’t ask me what that means – I’m just quoting from the copy of the menu they gave us when we left). What made the fish special was that they had quick fried the skin (crunchy) and properly cooked the fish (still soft and flaky – and delightfully seasoned. Yum.

I didn’t much care for one of my courses – but Victor was glad to help me out. My lemon and we think lime and/or mint sorbet cleanser was delightful too.

The cheese course was as perfect as it could be.

The offerings ranged from cow to sheep to goat, from mild to strong to stronger. I opted for 6 different cheeses, and they were properly sliced and placed in order of complexity of flavor on a plate. 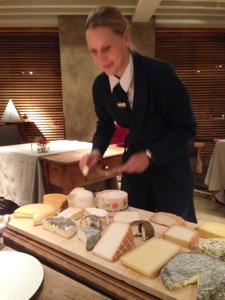 In addition there were 6 homemade jams – I asked to try all 6. And they had very lightly toasted and still soft nut bread.

One of the cheese I’d picked was called Trappe Echourgnac – according to the staff – it made with a walnut liquor that we thought was exceptional. When we asked for the name – they not only provided that – they gave us a second, larger, piece to enjoy. Such an elegant way of dealing with a guest.

Desert – ah desert. Not just one, or two, but 3 deserts were presented. The first was a pre-desert, my main desert was a carmel butterscotch wonder with again that signature contrast of crunch and soft. In this case – the soft was home-made ice cream. After that they served a mini-desert of home-made truffle and marshmallow – followed by a box of truffles and nougat – pick however many as you want – when they presented the bill.

Meanwhile – Vic was enjoying his 7 courses – again each better than the last. His cheese course was particularly special – a goat cheese that had been bruleed on top. I didn’t taste it – but he loved it. They called it Clacbitou – and described it simply as cheese with eggplant and sesame. It was anything but simple.

His favorite main course was the Fillet of veal and calf’s tongue with brown mushroom and Savoy cabbage. Again much more flavor and style than the description or picture could possibly could convey.

Bottom line – at the Atelier you definitely get what you pay for – and if you can afford it – then it’s definitely worth the money and time! It took almost 4 hours to eat dinner – and yet we never waited for a course. There are just so many courses to enjoy, discuss, and share.

One note – Victor ordered the wine pairing – and for each course they OPENED a bottle for him, and left it available for him to enjoy as much or as little as he wanted. The same happened at the other tables – no sharing of wine. What do they do with the half-finished bottles we wondered, but didn’t ask. My guess – they become wine by the glass for the Garden restaurant next door. But if other restaurants of this type have done that in the past – I didn’t notice it. Sure made me feel special! Wine was good too.

2 thoughts on “Atelier – the Ultimate Dinner – Ignoring the price of course!”