Sometimes a little imagination can go a really long way – and that’s pretty much sums up the art of Friedensreich Hundertwasser – or Fred Hundred Waters. I first saw his work in Montreal – the Museum of Fine Arts mounted an exposition – and I was totally blown away. Known for his outstanding use of colors and design – and lack of anything resembling straight lines – I promptly invested in one of his posters.

Several years later – in around 2005, I saw his tea cups – well, not really his tea cups – but tea/coffee cups that one of the high-end German porcelain producers made featuring his art. It was love at first sight. But I could only afford 6 mugs and saucers – the tea-pot that matched just seemed an impossible purchase. Naturally – I’ve mourned that decision for years – and have carefully been keeping my eyes out for it. Never saw it again.

Fast forward to October 2013 – Our wonderful German hosts suggested that we visit one of the best and oldest breweries in Bavaria – Kuchlbauer. Being rather keen beer drinkers – and always fond of the lighter ‘Wheat’ beers – we promptly agreed. Now imagine our surprise when we found out that not only are they known for their beer, their copy of the last supper (full size and painted in a grotto), and their singing dwarfs (I kid you not) – they have an amazing Hundertwasser designed tower. Beer and probably my favorite artist – it’s a plan!

So we drive to the brewery. Next to the parking lot is the newest work being built life-sized from his plans – I think it’s a church – but you can judge for yourself.

After taking a long hard look at this newest example of art on the loose, we enter and sign up for the tour. It’s a bit pricy as these things go – but the gal selling tickets promises us it will be worth it. Things don’t start off that well – because it’s German Unification Day – there are no workers to observe – so while we can admire the equipment – it’s not really functional.

Things go from ok to weird when we enter a grotto and are serenaded by dwarfs that represent the steps to beer making. Or at least I think that’s what they were singing about – it was all in German.

From there it was out into the daylight – and finally our look at the tower. It’s pretty cool.

Inside the brewery there were demo versions, at least one built by Hundertwasser himself, the rest built by local artists following his designs. But for the real thing – you must go outside. Wow. What a tower. We climb the 150 steps to the top – admire the view of the totally solar-powered brewery below us – and then climb down.

Now it’s time for beer tasting – and in German a taste is at least a 1/2 litre! They give us 4 bottles of beer and 4 wonderful tasting pretzels, my favorite part. We enjoy the beer, scarf down the pretzels, and then decide to buy 4 of the very unique beer glasses they are using. Victor sends me into the shop on my own – and what do I see? My tea-pot! Finally – I found it. Or perhaps better said – it found me. 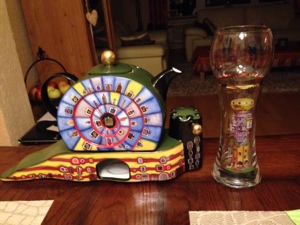 We have an emotional reunion, and I leave the proud owner of the most amazing tea-pot – and 4 beer glasses – gift from the owner of the brewery who was delighted to finally sell the tea-pot!

4 thoughts on “Beer and my long lost tea pot – Color me Happy!”