I don’t know about you – but my image of Octoberfest was mostly ladies in Dirndls, horse-drawn carriages, and beer barrels. Having now done a day at the Munich Octoberfest with some german friends (Helmut and Andrea), I can tell you that there is a lot more to Octoberfest than those cute pictures. 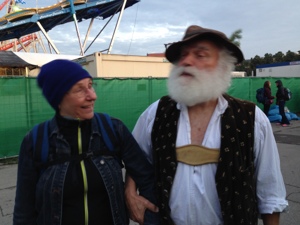 My friend above is a local who lives just minutes from the Octoberfest site – and after gleefully posing for this picture, showed us a picture of him as Santa Claus!

Like most ‘locals’, we arrived by metro. And the Munich metro, while dating from the 72 Olympics, is very nice. Comfy seats, nice and quiet both inside and on the tracks waiting for the train to arrive, and pleasantly frequent. My only negative – unlike the Metro in Seoul, you don’t know how long to the next train. Is that so very hard to do Munich? But it is still so much better than trying to find a parking place!

We could have saved big had we realized that the ‘partner’ day ticket was good for up to 5 adults. But we paid for and used a 10 ticket strip before reading the signs posted inside the metro station. Next time I travel with a group in Munich – I shall be much smarter.

But on to Octoberfest.

We were visiting on a Friday – and arrived around 2:00 in the afternoon – planning on eating lunch before wandering the site. Surprise – all the 14 Giant Beer tents were already packed – with waiting lines even. Left to our own devices, Vic and I would have just patiently stood in line, but Helmut had a better idea. There’s a section of the Octoberfest area called “Oide Wisen” – which my friends translated to mean – traditional area. You had to pay 3 Euro’s each to enter – but once in side, the Traditional Beergarden there had room – and no waiting lines. Plus the rides were much much cheaper – 1 Euro each rather than the 4 to 6 Euro’s demanded by the rides in the main part of the site.

So we entered, found our selves seats outside and were quickly greeted by our dirdal clad waitress. Hint 1 – don’t try to order 1/2 a litre of beer. They laugh at you. The one and only size is a litre – and in this Beergarten, the beer was Augustiner. In our professional tasting experience, it’s the best. Light, tasty, and even better – served in a stoneware mug! My confidential source (Helmut) says that most of the Beergartens use glass – but this is the Traditional Hall. They use traditional ceramic/pottery/stoneware mugs! Heavy – but who cares.

While it’s hard to complain about any food served with effectively unlimited beer – I have to say my Duck was clearly outstanding. A huge portion – I think it might have been a whole duck – delightfully seasoned and cooked to perfection. Oh it was yummy.

We sat, ate, drank, and chatted – and then the band arrived. At least 10 members strong – what followed can best be described as the quintessential Octoberfest production – complete with dancing couples, feet and pant slapping by the guys – and finally a whip cracking exercises that was performed on the tables. The band then invited everyone to dance – and dance we did. A modified Polka like dance – with much laughter!

After lunch, we wandered back to the main area to admire the idiots that ride on the rides. After a lunch fueled by at least 2 litres of beer – would you want a ride that flung you upside done and then shook the money out of your pants? I think not.

The ‘midway’ area had its share of crazy options: haunted houses, rollercoasters that looked like runaway mine trains complete with 40 foot high waterfalls, loop-the-loop coasters that resembled Olympic rings – and plenty of opportunities to try your luck at busting balloons, firing cross-bows, or hammer tossing. There were also plenty of strikingly beautiful girls.

But there were things I had never seen. My top favorite – and we must have watched the action on this one for at least 20 minutes – was a wonderfully simple contraption.

The entrance was up a few steps – putting the start of the ride about 10 feet above the crowd. There was a ‘magic’ carpet that ran in an endless loop – at extremely high-speed – up a relatively steep incline. I’m guessing around 35 degrees. At the end of the ‘carpet’ was a circular staircase that led up to the top of a circular slide that you rode back down. Not much to it, right. Wrong! Riding that carpet was a challenge. There were 3 guys whose job it was to keep people from hurting themselves, and making sure that everyone made it up the ‘carpet’. For women and kids – that meant holding their hands and leading towards the top of the ride, while the rider leaned backwards. Not hard – the ladies managed to get up with little problem.

But for the guys – no help was forthcoming. Instead the guys were encouraged to leap onto the ‘carpet’ – which about 1 in 5 could do. For the remaining 4 guys – the ride up the carpet was done with legs flailing, arms whirling, and the crowd convulsed with laughter. More often than not, the guy would end up on back – feet uphill! The helpers would grab their necks, shirts, hair to make sure their heads didn’t touch the carpet – and up they went.

In a less drastic turn of events – the helpers would get on soon enough to just haul the guys up using their shirts and pants for leverage! It was a complete hoot! And from the crowds waiting to try their luck – a hopelessly addictive activity.

I was fascinated by some of the very traditional ‘rides’ in the ‘Oile Wisen’ area – including a boat like swing that was human-powered. Food shops sold all the expected traditional beer drinking snack foods – candied nuts, bratwurst, 1/2 meter long thin dogs that I never heard the name of, a spicy thick sausage made with Bison, puffed up fried dough, chocolate covered fruits – ranging from strawberries to Kiwi’s and Bananas. Given the cold, I think the ice cream vendors suffered from a lack of customers, but the vendors of heavy sweaters, rain jackets, and hats did a land office business.

I bought a peacock and ostrich feather for my hair, but besides that – our money went for food and beer – lots and lots of beer.

One thing I didn’t buy – but admit I was intrigued by – were the giant ginger bread cookies. Iced and decorated – and each having a unique slogan (the ones in English were things like – I love you, you are my potato pancake), these are intended to be purchased as gifts from a guy to his girl – and then proudly worn. Well, not something I’d expected to see at Octoberfest.

After wandering the site, we headed back to the Traditional Hall for more music, more beer, and more pretzels. Freshly baked, huge pretzels, the only resemblance these goodies bare to the pretzels we get at home are the shape. These are soft on the side, well salted on the outside – and probably certifiable addictive. I stopped counting at 3. Given that each one is twice the size of my head – I didn’t stop too soon!

So food, fun, rides, beer, shopping, laughing people, and Cookies. Octoberfest is a local celebration that has taken on international importance, but remains resolutely local. Don’t be surprised if you are the only international face you see – this is a local party to which you are lucky to be invited.